How to Create Cove Lighting in AutoCAD

Creating Cove Lighting in a AutoCAD

Cove lighting can be designated in a reflected ceiling plan by using a combination of solid lines showing the edge of the cove, and dashed, grey toned (or sometimes called screened) lines showing how far the cove recess goes in from the edge. The darker solid cove lines stand out to define the edge, while the grey toned dashed lines show the depth of the cove, but are lighter in color.

Since the back edge of the cove and the cove light fixtures are hidden from sight, they are shown as a lighter grey tone.

There are  few ways to manage the hidden lines and the light fixture lines. You should create a separate layer to show your cove lighting (fixture lines and hidden lines), and assign a grey toned (screened) color to that layer. See the ArchBlocks tutorial on using grey tones, or screened colors in your drawings. 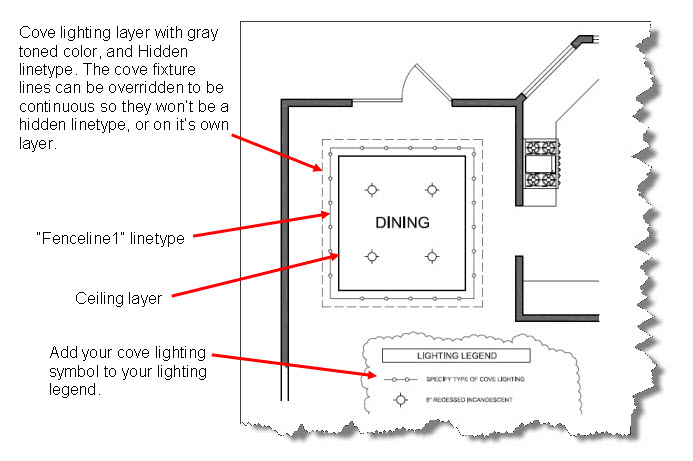 That's all on the How to AutoCAD - Cove Lighting free tutorial.